School lessons, television programmes and books sometimes give the impression that Indians live in circular villages made up of houses called ocas, and that this is what all indigenous villages are like. Some indigenous peoples do live like this, but there are actually many other types of indigenous houses and villages. Find out about them here!

First of all, do you know what an oca is?

An oca is one of the names for an indigenous house. It is a word from the Tupi languages.

Among indigenous peoples there are many different ways to build houses. This is because every group has different ways of thinking about, and of relating to, the environment around them. The houses a people live in are part of their cultures.

What shape are indigenous houses?

Indigenous houses vary in shape, according to the customs of each group. Some are round, some rectangular, some pentagonal, some oval...The layout of villages also varies from people to people. In some indigenous societies, contact with non-Indians brought about a lot of changes to the layout of villages and individual houses, and to the materials used for construction.Is the same true for villages far away from towns and cities?

Yes. These changes have happened in some of the more remote villages, but being close to towns and cities makes them more common. Where villages are close to cities, there is likely to be more interaction between Indians and non-Indians. Houses end up being made from materials bought in shops. For example, they may be built with brick walls. They end up looking more like the houses of non-Indians.

The Yawalapiti live in the southern part of the Xingu Indigenous Park. It is also known as the Upper Xingu. Like all the villages in the region, Yawalapiti Village is circular. The houses are built around a central area. The central area is only used by men. In it there is a Men’s House.What are Yawalapiti houses like?Different parts of their houses are related to different parts of human or animal bodies. The front of the house, for example, is thought of as the chest. The back is the spine. The door is the mouth. The pillars are the legs.

The houses are communal. This means they are shared by several related families. Houses vary in size according to the number of people living in them. Inside they are normally organized as follows: there is a kitchen space; a store for food which is usually in the centre of the house, and another space where visitors are received and dances held.People normally sleep in hammocks hung from the sides of the houses. At night, two doors made of wood and dried leaves are closed. And small fires are lit underneath the hammocks to make sure that it is warm inside.

What is the Men’s House?

The villages of many different indigenous peoples contain a special house just for men. It is not a house to live in, but a space where men meet and carry out rituals. Women are not allowed to go into the Men’s House or participate in their rituals. These are masculine activities. Among indigenous peoples it is common for different activities to be carried out exclusively by men, or exclusively by women. The men’s house is a good example of this practice.

The Karajá have villages in the Brazilian states of Goiás, Mato Grosso, Pará and Tocantins. To look at, their houses seem much the same as the houses of non-Indians living along the nearby rivers!Long ago the Karajá did not have permanent villages. During the rainy season, when the River Araguaia rises, a village would be built along its highest banks. The houses would be wooden structures with roofs made from dried leaves. The roofs reached right to the ground so they completely enclosed the houses and protected people inside from the wind and rain. During the dry season, the village would be moved to the river’s edge, making it easier to fish and collect food. Simpler houses were built at this time of year than during the rainy season. Whatever the season, though, the houses would be arranged in lines facing the river. The one house that would be set back from the others would be the men’s house. This was also called the ‘Casa de Aruanã’ or the ‘Casa do Bicho’. It was where men would meet, and where they would pass skills on to single young men.Are their villages different these days?

Many of the Karajá were killed in a violent massacre. Because of this they gave up the traditional annual pattern of their lives, and stopped building houses in different places in different seasons. These days, their houses are square or rectangular. They have hard earth floors and roofs made from wood and dried leaves of babaçu palm trees. The walls are made from dried leaves, and have no windows. The gaps between the dried leaves let light and fresh air in, and allow smoke to escape. There are no internal divisions in these houses. The different spaces are only marked out by mats. Each of these defines where a family sleeps at night, and works or rests during the day.In some villages there are houses with brick walls that were built by the Brazilian government. But people who lived in them abandoned them and chose to live in houses made from dried leaves instead. This was because the brick-walled houses were built without any consideration of the local climate. And an even bigger problem was that their design showed no respect for the social and cultural customs of the Karajá people.

These days there are about 15 thousand Xavante people living in 12 areas of indigenous land in the Brazilian state of Mato Grosso.The Xavante used to move around a lot. They would live in a variety of different places. They would have one village that acted as a base, but they would migrate across their territory as the year passed, living in temporary camps.When not camped out across their territory, they would live in their main village doing various sorts of work, including tending to their gardens.Some of the large cities of the state of Mato Grosso now stand where previous generations of Xavante people would have travelled during their migrations.Are there many Xavante villages?

These days there are approximately 165 villages. Whenever possible they are built where two rivers meet. The villages are shaped like horseshoes facing the larger of the two rivers. Their temporary camps were also set up in this form. The Warã is a central space where men meet to make important decisions. Women and children are not allowed to take part in these meetings. What are Xavante houses like?

Traditional Xavante houses are made from wood, and covered with dried leaf roofs which reach the ground. They are built close to each other, in a horseshoe layout. The only entrance to each house faces the centre of the village. Inside the houses there is a space for each family, marked out by mats. These family spaces are arranged around a central fire where everyone meets.

The Wajãpi live in the Brazilian states of Amapá and Pará. They also live in French Guiana. They usually build their villages near to small rivers. This enables them to hunt, fish, grow crops in gardens and find the materials that they need to build houses. When the natural resources they need begin to run out, they abandon their villages and build others elsewhere. What are Wajãpi villages like?When you first look at Wajãpi villages, each seems to be different. There is not one single layout. The houses do not seem positioned in any specific order. But a closer look reveals that the houses are positioned in family groupings. Wajãpi villages usually consist of gardens and gathering spaces. Houses are built around the gathering spaces. A single village may have one gathering space with several houses around it, or there may be several gathering spaces. This is determined by family relationships, as they generally live near to one another.And what are the houses like?

Their houses are one of two types. It depends whether people are living in them on a permanent or on a temporary basis. Temporary camps are built during hunting expeditions. The houses are simple. They are only big enough to cover the hammocks. Simple houses may also be built near to gardens so that mothers can be near recently born babies. Or they may be built near to permanent houses, and used as kitchen-houses.

Permanent houses vary in size. But they stick to a traditional design. They are rectangular, built from wood, and roofed with dried leaves. These days some houses are more like those of non-Indians. They have doors with locks, and internal brick walls dividing up separate rooms. Hammocks are hung in the centre of the house, and there is always a fire burning at one end. Food is prepared outside the house, either in a separate kitchen-house or over a fire in the open.AThe inside of a house is mainly used for eating and resting. Families always stay together. On certain occasions, all families meet in a village gathering space. They hold collective meals and festivals. On these occasions the men and the women stay apart.

What do the Tuyuka say about their houses?

The Tuyuka live in the Upper River Negro region to the north east of the Amazon. They speak a language from the Tukano linguistic branch. There are about 825 Tuyuka people in Brazil, and another 570 in Colombia. Do you know the difference between how they used to live and how they live these days? The text below is taken from the book Histórias Tuyuka de rir e de assustar (2004). Find out what they have to tell us:

The sacred house or maloca

Long ago all the indigenous people of the River Negro would build big houses called maloca. Several families would live collectively in these houses. They were big enough for up to 10 families.During a ritual or a festival, the maloca represented the whole universe. The floor was the ground, the pillars were the mountains holding up the roof which represented the sky. On the floor of the maloca, an invisible river ran from west to east. This was the source of life.

These days, maloca are not common any more. This is because Roman Catholic missionaries had a particularly violent approach to converting Indians in the region. Some of the missionaries were so determined to challenge the traditional culture of the local indigenous people that they would not let us live in maloca. Instead, they insisted that each family had to build their own house. Text provided by the Tuyuka people of the Pari Acima communities of the, Upper River Tiquié 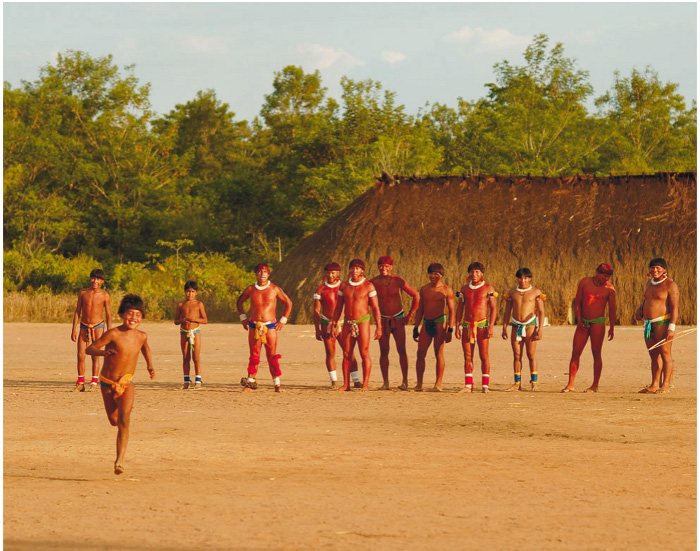 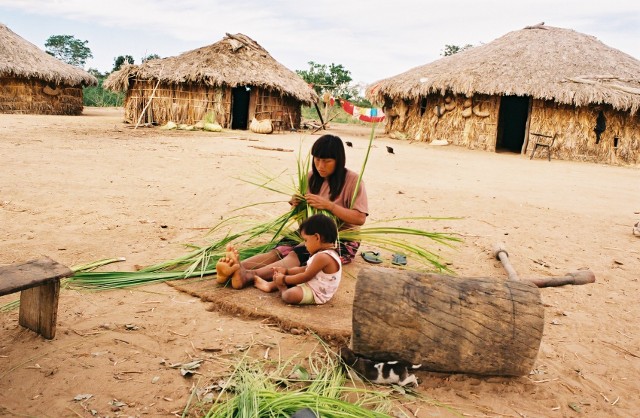 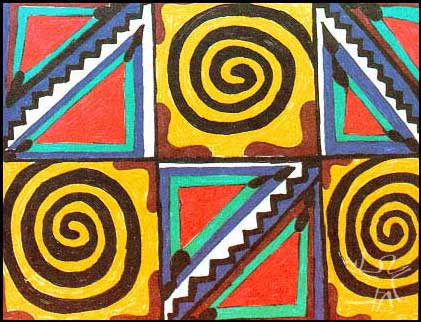 How they live
SEE MORE